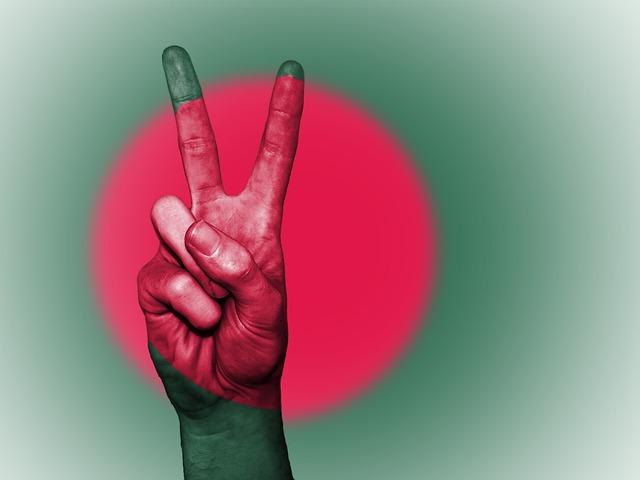 Bangladesh emerged on the world map through the sacrifice of 3 million martyrs in 1971. Since gaining independence in 1971, Bangladesh has undergone considerable political and economic change.

The indomitable courage and spirit of the people, coupled with the bold and visionary leadership, the country is progressing very rapidly. The immortal legacy and ideals of our great leader and Father of the Nation Bangabandhu Sheikh Mujibur Rahman by whose clarion call, the Bengali nation started the War of Liberation remain as the guiding principle of the country’s advancement, which has gained momentum under the dynamic leadership of Sheikh Hasina, her illustrious daughter and Prime Minister of the People’s Republic of Bangladesh.

We have accomplished a great deal in the last 50 years. When we emerged as an independent nation at the end of 1971, our war-ravaged country of 75 million was mired in widespread suffering. The per-capita GDP was only US$133 and growing minimally, if at all, and life expectancy was only 47 years. Bangladesh is now a vibrant economy of 165 million, with a per-capita GDP of US$2,800 and growing fast, and life expectancy has risen to 73 years. Taking into account the relative cost of living—that is, adjusting for purchasing power parity—Bangladesh is now close to being a trillion-dollar economy. GDP has grown consistently since 2010 at more than 6% annually; it exceeded 8% in 2019, but there has been a small setback due to the pandemic and is poised to expand by nearly 7% in 2022. Bangladesh has recently been among the fastest growing economies in the world, resulting in higher living standards and improved social and health outcomes.

Once in a situation of chronic food deficit, the country is now one of the world’s top three producers of rice, inland fish, and vegetables. The country is the fifth largest producer of vegetables in the world and the fourth largest in production of freshwater fish. We are self-sufficient in livestock and poultry.

Bangladesh offers a range of opportunities for investors to participate in sustainable investment in emerging Asia, and its green credentials start at the top. PM Sheikh Hasina has recently been awarded the SDG Progress Award by the United Nations’-sponsored Sustainable Development Solutions Network.

The ready-made-garment industry has long been the heart of the Bangladesh economy; it was the second largest exporter of ready-made apparel in 2020. Now it’s also winning accolades for sustainability. The economy has more green garment factories recognised by the U.S Green Building Council than anywhere else in the world.

The country is expected to graduate from the United Nations’ Least Developed Country category in 2026 and to become an upper-middle-income country within the next decade. Bangladesh had a PPP adjusted GDP per capita of $5,139 in 2020.

Bangladesh’s foreign currency reserves have averaged above US$30 billion annually over the last seven years. In the 2022 fiscal year, exports reached a record high of US$52.1 billion. With strong growth set to continue well into the future, between 2020 and 2035, the Centre for Economics and business Research forecasts that the position of Bangladesh in the World Economic League Table will improve considerably, with its ranking rising from 41st to 25th by 2035.

Bangladesh’s debt-to-GDP ratio has consistently been one of the lowest in the world, and this trend has not changed. Even at its current level of 40%, the country’s debt to GDP ratio is still much lower than the globally recognized maximum limit of 77%.

Bangladesh is witnessing a revolution in infrastructure. The recently completed 6.15 km long Padma Bridge, for instance, would increase Bangladesh’s yearly GDP by 1.3 to 2 per cent and connect the country’s southwest to its northern and eastern areas, therefore cutting greatly the travel time between Dhaka and key economic locations.

There is an increase in the number of Bangladeshis working and sending money back home. Remittance earnings from expatriates working abroad hit a record US$21 billion in 2020, the eighth highest in the world.

The country’s middle class population is expanding rapidly-an average of 10.5 per cent annually. It is one of Asia’s most untapped growth markets, and it’s expected that by 2025, the overall population will reach 34 million. On the other hand, the growth of the middle-income class has a direct positive link with increasing levels of foreign investment.

Bangladesh is undergoing fast urbanization process as a result of the revolution in the country’s infrastructure and transport connectivity. With around 36% of the population living in urban areas, according to Mercy Tembon, World Bank country director, ‘Bangladesh is rapidly urbanizing’.

In Bangladesh, there are around 47.61 million individuals who have access to the internet, and above 45 million people regularly use social media. International assistance and investment are also looking for an economy which has already made a considerable amount of development in the cutting-edge technological platform. More than 100 public and private universities provide tertiary education in information and communications technology and other new technologies. Eight thousand union-level digital centers provide one-stop services to the vast rural population.

“Today’s Bangladesh is a transformed country, one that is economically self-reliant. This amazing transformation within a decade has taken place neither accidentally nor by a miracle. It has happened because of planned efforts, grassroots initiatives, and the entrepreneurial spirit of our people, who are determined to overcome our adversities”

In comparison to average literacy rate of 86.3% seen throughout the globe, Bangladesh’s percentage is at 75%. There are over 2.3 million young professionals who join the workforce every year in Bangladesh, and approximately 45% of the population in Bangladesh is under the age of 24 years old. Bangladesh’s economic expansion has provided jobs for millions of people, particularly women. According to the World Economic Forum, Bangladesh has the highest rate of female enrolment in primary and secondary schools among South Asian countries. Almost 100% of school age children are going to school, and primary immunization has reached the entire child population. To encourage children and their families to go to school, the government has taken the initiative to distribute cost-free textbooks and a large number of stipends to students up to the secondary level. About 23 million students from primary school to the higher levels have been given various stipends and scholarships.

Bangladesh has a coastline of 580 kilometers, and its Chattogram and Mongla ports handle 90% of the country’s trade. Bangladesh also has 10 operational land ports that connect several states, in the country’s neighbour, India. Additionally, in order to strengthen its geostrategic position, Bangladesh is now constructing deep sea ports in the cities of Matarbari and Payra.

The Asian highways, AH1, AH2, AND AH41, which link India and Myanmar, pass through the country of Bangladesh. In addition to this, regional highway corridors, such as SAARC, BIMSTEC, and SASEC encircle Bangladesh on all sides. All of these features of connectedness are also strongly reliant on the success of Bangladesh due to the country’s exceptional geographic location.

Bangladesh has so far had a more contained COVID-19 outbreak than has been observed elsewhere in the world. The government was successful to vaccinate more than 100% of the target population. The monetary value of the overall stimulus package as announced by the government to tackle the fallouts from COVID stands at US$ 15 billion or about 4.5% of GDP.

Bangladesh is on its way to joining the ranks of developed economies within just two decades. Its 20-year road map for development, known as Vision 2041, includes measures to boost people’s incomes and the country’s exports and life expectancy. The goal is to transform Bangladesh into a high-income country.

To drive that development, it’s opening up financial markets, implementing pro-business reforms and building an inclusive, sustainable economy that offers investors the opportunity of a life time. The government is removing obstacles to business and implementing policies that foster growth. Its efforts are gaining recognition: Bangladesh was among the top 20 countries that did the most to improve the ese of doing business last year in a ranking by The World Bank. There is still room for improvement, and the government plans to pursue further reforms.

Bangladesh is a development success story in South Asia, and the World Bank is proud of being a partner in the country’s development journey for the past 50 years`- Martin Raise, World Bank Vice President for South Asia on September 21, 2022. Corresponding to the VP of the WB’s assertion, Bangladesh’s economy has grown well during the last decade. As a result, Bangladesh is well on its way to becoming the next Asia Tiger. Stability in both the economy and the political sphere is the primary force propelling it forward.

The wealthiest individual in Asia, Gautam Adani, has devised a strategy to begin supplying Bangladesh with energy generated at a coal-fired power plant with a capacity of 1,600 megawatts by the end of 2022. The investment and energy collaboration from Asia’s wealthiest man has also sent a strong signal that Bangladesh is an investment-friendly and stable economy.

Today’s Bangladesh is a transformed country, one that is economically self-reliant. This amazing transformation within a decade has taken place neither accidentally nor by a miracle. It has happened because of planned efforts, grassroots initiatives, and the entrepreneurial spirit of our people, who are determined to overcome our adversities. It is the result of hard labor, blood, toil, and tears of enterprising farmers, garment workers, and expatriates abroad. In spite of the pandemic, Bangladesh celebrated two major milestones. In 2020, we celebrated the Birth Centenary of the Father of the Nation Bangabandhu Sheikh Mujibur Rahman. Last year, we celebrated the “Golden Jubilee of the independence of Bangladesh”. This year we are celebrating the 50th anniversary of the establishment of diplomatic relations with Spain.